History of the Ford Tractor 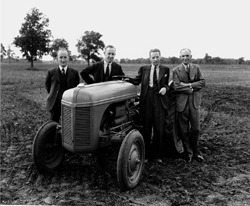 In November 1915, Henry Ford organized the Henry Ford and Son Company to develop a farm tractor and build a tractor factory, because the other stockholders of the Ford Motor Company didn’t want their rich dividends diluted by the cost of developing a tractor. He then proceeded to divide some of his key personnel between the two companies. Charles Sorensen was moved to the new company and given the responsibility of converting an old brickyard in Dearborn, Michigan, into a tractor factory. Engineer Joe Galamb remained at the Ford Motor Company in charge of the Engineering Department at the Highland Park auto factory and Engineer Gene Farkas was transferred to the new company to design and develop a tractor.

It is interesting to note one Ford tractor book states Galamb was fired and another says he was hired at this time. Obviously, one of the books is wrong. However, careful research reveals both books are wrong as Joe Galamb was hired in December 1905, was the primary design engineer for the Model T car, and retired from the Ford Motor Company in April 1944.

The division between the two companies was finalized on February 2, 1916 at a Ford Motor Company board of directors meeting when Ford Motor agreed to give up any claims to tractor designs and patents. In turn, Henry Ford agreed to pay Ford Motor $46,810.76 for previous tractor development work and to not use the only the word Ford on his tractors, because the Ford Motor Company might enter into the tractor business in the future and use the Ford name.

The Henry Ford and Son Company started tractor production in October 1917 by building 6,000 tractors for England and 1,000 tractors for Canada to assist those countries with food production during World War I. There was no identification on these tractors and they have come to be known as MOM tractors, because they were built for England’s Ministry of Munitions. In April 1918, Henry Ford began producing this tractor for the U.S. market with the Fordson name on the upper radiator tank and the Henry Ford & Son name stamped into the end of the fuel tank. The Fordson name was a contraction of the company name and had been registered as a trademark by January 1918.

The Fordson F tractor was a standard-tread tractor with about 19 belt horsepower and a 2-plow rating. It had a vertical, 4-cylinder Hercules engine which started on gasoline and ran on kerosene, a 3-speed transmission, and a worm-gear final drive. The engine, transmission case, and the final drive served as the frame. Ignition was provided by magnets on the flywheel and a thermo-siphon system circulated water to cool the engine.

In March 1919, Henry Ford announced he planned to start a new company to build cars and tractors, which caused the other stockholders of the Ford Motor Company to sell their stock to an unknown buyer. The buyer was later revealed to be Henry Ford and he was now the sole owner of the giant Ford Motor Company. He then folded the Henry Ford and Son Company into the Ford Motor Company and changed the name on the end of the fuel tank to Fordson. In February 1921, production of the Fordson was moved from the Dearborn tractor factory to the new massive Rouge factory which received iron ore from Ford’s mines, delivered in Ford’s ships, at one end and delivered assembled tractors and Model T car parts at the other end. Also Ford started building the Fordson’s engine at about this time.

The Fordson F tractor sold for $750 when it was introduced and its retail price was lowered to $625 in January 1921. An agricultural depression started in mid-1920 which greatly reduced tractor sales and then Henry Ford made matters worse for the tractor industry in January 1922 by slashing the price of the Fordson to $395. This was less than what the tractor companies that were buying engines were paying for the engine and 113 of the 164 companies building tractors in 1919 were out of the tractor business by 1928. Ford’s production of almost 102,000 tractors in 1923 represented 77 percent of the number of tractors produced that year.

Although the Fordson F dominated the tractor market from 1921-1926 and was many farmers first tractor, it had its faults. It was often hard to start, especially if the operator forgot to switch back to running on gasoline before shutting off the engine. Water would boil in the radiator under a heavy load and had to be replenished. Engineer Howard Simpson developed a magneto and a water pump to correct these problems, but Henry Ford wouldn’t adopt them. By 1927, the Fordson tractor was encountering sales resistance and production ended in the U.S. in 1928.

This well written and concise passage was written by Larry Gay, the author of four tractor books published by the American Society of Agricultural and Biological Engineers, including A Guide to Ford, Fordson, and New Holland Tractors. This book may be obtained from ASABE at 800-695-2723 or asabe.org, click publications and then click book catalog.

© 2012 The Brassworks all rights reserved